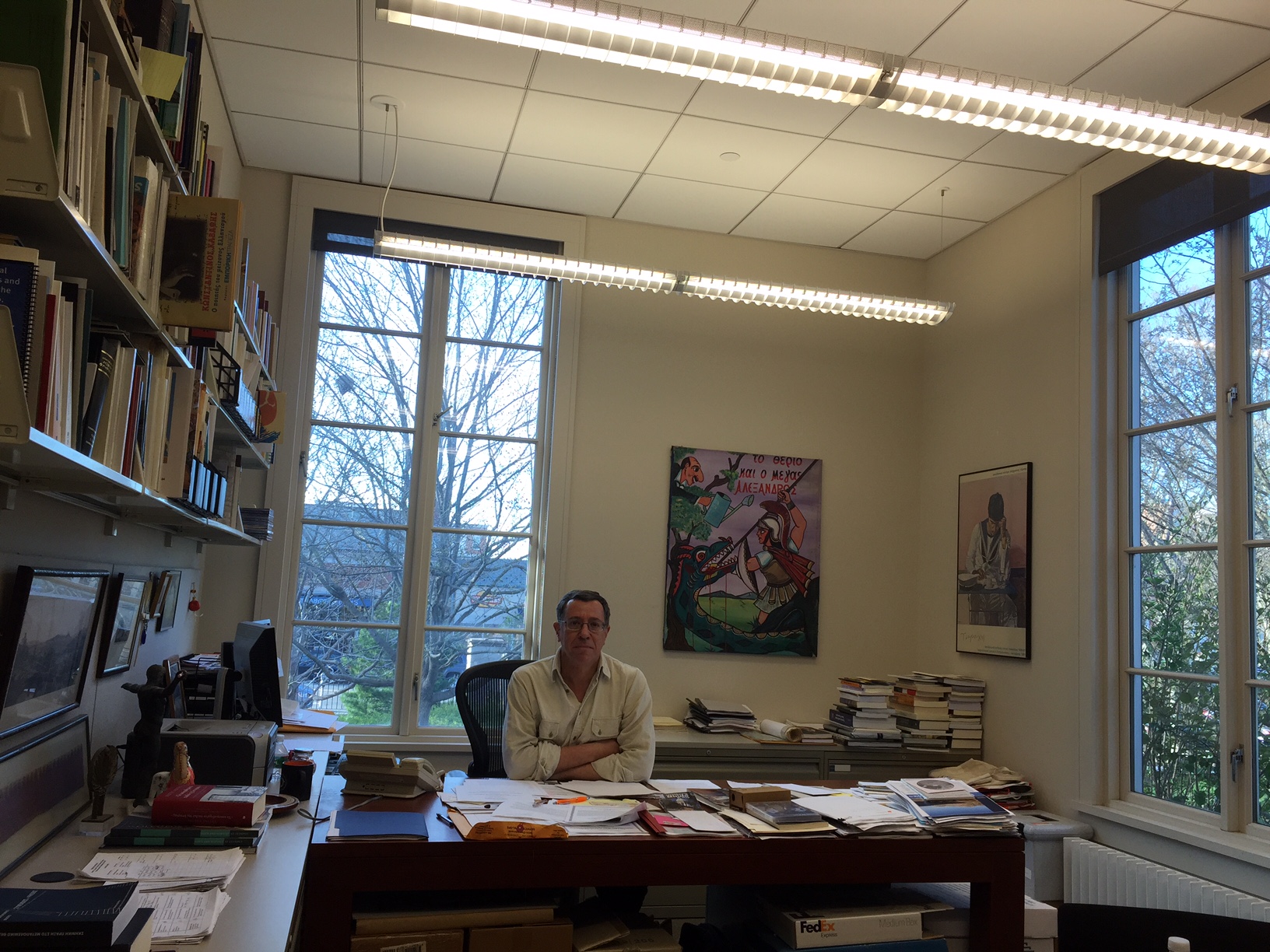 PRINCETON, NJ – Princeton University is one of the oldest and most prestigious in the entire world. It is particularly distinctive among research universities and to that end, the Stanley J. Seeger ‘52 Center for Hellenic studies was established in 1979.

The Center’s mission is to promote the interdisciplinary study of Hellenic culture – Classical, Byzantine and Modern – to stimulate creative expression in and about Modern Greece, and to establish links between Greek students, scholars and institutions and their counterparts at Princeton and the United States.

Since 1980 you have been at Princeton University where you are currently the Director of the Seeger Center for Hellenic Studies and Lecturer in Modern Greek, Department of Classics. Please tell us about your experience and your long association with the Institution.

DG: As an undergraduate at Princeton, I majored in Physics, but I also signed up in as many literature and arts courses as I could, including student-initiated seminars in modern Greek poetry taught by the eminent translator and scholar Edmund Keeley. Later, while pursuing graduate studies in Nuclear Engineering at MIT, I took Modern Greek poetry classes with George Savvides who held the George Seferis Chair at Harvard. A year later I was given the opportunity to become teaching assistant in Modern Greek at Harvard.

By that time, I had realized that my deep intellectual and professional commitments were in education and the humanities, in particular, Modern Greek Studies. In 1980 Stanley J. Seeger, a Princeton alumnus and Philhellene, who by then had become a citizen of Greece, announced his splendid gift to his alma mater in support of Hellenic Studies. Seeger’s extraordinary gesture moved me deeply and inspired me on a personal level. The very generous endowment that he established at Princeton would guarantee the flourishing of Hellenic Studies in perpetuity. I saw this as a tremendous opportunity for Greek education, scholarship and culture, and this gave me a huge incentive to move to Princeton where I have been ever since, teaching Modern Greek, building and leading the Hellenic Studies Program. In the late 1980s I was appointed Executive Director of the Program in Hellenic Studies. In 2010 Princeton established the Seeger Center, in recognition of the scale, quality and broader impact of our work in the humanities and the creative arts at Princeton, in Greece, and beyond. I was offered the honor to be the founding Director of the Center, one of the largest, most active and preeminent interdisciplinary units at the University. Looking back to 1974, when I first came from high school in Greece to study at Princeton, the Modern Greek Studies field was in its infancy in the United States. In those early days we called our classes “to kryfo scholio.”

Today, there are several very strong programs around the country and scores of excellent young academics whose work focuses on modern and contemporary Greece. I feel very fortunate to have made this intellectual voyage, to have studied under and worked with some of the most distinguished scholars in our field. It gives me a sense of pride to have been part of this collective, collaborative, international effort toward the overall growth of Hellenic Studies in the United States and around the world.

What does teaching mean to you and how would you describe your relationship with your students?

DG: Teaching and mentoring students is an essential part of my work, while academic administration takes up a large portion of my time. In the classroom at Princeton and on-site in Greece, it is a rare privilege to work with some of the brightest and most talented students in the world, to offer them the opportunity to engage with the Hellenic world in all its manifestations, and to share with them the joy of discovery, as they experience Hellenic culture, meet people from all walks of life, and travel the landscapes of Greece. Language learning opens your eyes to new worlds: It is a process of encounters, discovery and self-knowledge. Beyond the transmission of knowledge and skills, I teach my students the values of intellectual rigor and professional integrity, so they can become responsible, engaged citizens in civil society. I have taught and advised hundreds of undergraduate and graduate students over the years. With many of them I keep in touch long after their graduation. Their life trajectories are impressive and diverse: academics, public servants, teachers, professionals, business people, writers, and artists. All of them are part of our extended family of Princeton Hellenists. 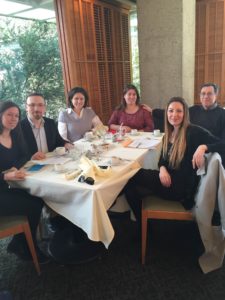 You manage several fellowship programs for Greek and international students, scholars, writers, and artists, and you coordinate academic partnerships with Greek universities, museums, libraries, foundations, schools, and cultural institutions. Please elaborate on that.

DG: Our Hellenic Studies fellowship programs at Princeton are unique in the world, in terms of scale, range, and diversity. We maintain the highest scholarly standards in selecting fellows through rigorous review processes. Once they come to Princeton, our fellows form a tightly knit academic community that interacts closely with some of the leading minds at the University. One aspect of our mandate is to support creative expression in and about modern Greece, so we have offered fellowships to scores of Greek writers and artists over the years.

From day one we have sponsored collaborations with many Greek academic and cultural institutions (museums, libraries, archaeological service, etc.). With the recently established Paul Sarbanes ’54 Fund for Hellenism and Public Service, we are expanding in exciting new directions – economic policy, international relations, public administration – that we hope will be beneficial for Greece, in view of the huge challenges it faces. I believe that this latest initiative is central to the concerns and aspirations of the American-Hellenic community. It is thrilling for me to be at the center of our effort to identify and nurture international academic talent, to support scholars at the launch of their careers, and to guide them professionally. It is a huge responsibility and a continuous challenge to help train and mentor the next generations of scholars in Hellenic Studies. During the last 35 years, our fellows have come from over 30 different countries. Over 700 of them have been from Greece. Regardless of nationality or ethnic origin, their focus is on Hellenic culture: ancient, medieval, modern, or contemporary. They constitute a vast and growing network of scholars at institutions in Greece and around the world. I call them our world wide web of Hellenists.

DG: Leading a large and complex academic unit such as the Seeger Center is like directing a symphony orchestra: managing behind the scenes, while also directing from the podium, to perform the most diverse and difficult repertoire, both classical and cutting-edge, concert after concert, season after season. A clear sense of mission is of paramount importance. To inspire and motivate colleagues, staff, and students, one needs to have a broader vision for the long term, while also caring for the details and the individuals themselves. Setting realistic priorities for the short term and the day-to-day is a must. Respect of alternative viewpoints is critical. Balancing continuity and change is a delicate balance. Patience, focus, administrative agility, academic diplomacy, imaginative planning, forward-looking spirit, self-effacing leadership, sustained effort, humility and team-work are all essential. Continuity of leadership and inclusivity are crucial elements. Of course, resources and a supportive institutional context are critical to the success of any academic initiative.

At Princeton, thanks to the legendary generosity of our American and Greek donors, we are blessed with very significant resources that allow us to build with confidence, to consolidate, and to plan growth over a long time horizon. Seeger’s vision was ahead of its time in many ways, including the stipulation that every Princeton student in Hellenic Studies would be supported for travel to Greece for serious study, independent research, and an immersive cultural experience. Princeton is a leading institution, a magnet and haven for scholars and students in Greek Studies: Ancient, Medieval, and Modern. The academic and cultural programs that we maintain require very significant resources – and we are certainly blessed in this respect. But I want to stress the sense of responsibility that comes with such blessings. And, of course, I want to emphasize the human factor: personal commitment, hard work, integrity, fairness and high standards are at the core of every successful academic initiative.

You have published several books. On what projects – books or otherwise – are you currently working?

DG: In between teaching, advising, and directing the Seeger Center, I am working on several research projects and cultural activities: two major exhibitions and related publications, to celebrate the 40th anniversary of Hellenic Studies in 2019; the second volume of our acclaimed reference catalogue of Greek manuscripts at Princeton; a guide to our Hellenic Collections (rare books, art objects, coins, maps, manuscripts, archives, etc.); and an oral/archival history project on “Princeton and the Hellenic World” that will include profiles of distinguished Princeton men and women active in Greece, as well as Greek students at Princeton, from the Greek war of Independence to the present.