Dividend Day at the Bank of England 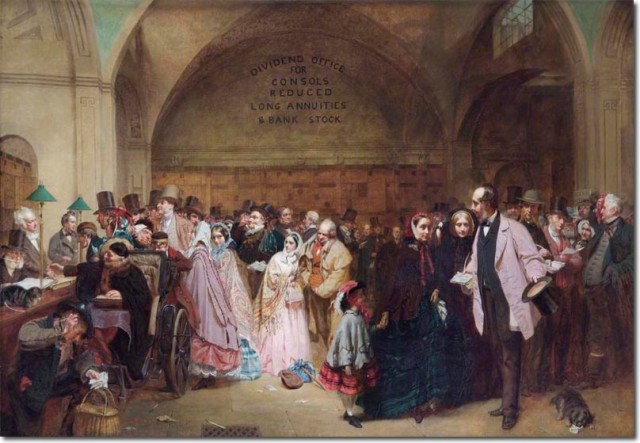 English painter of the Victorian era. He was trained in London at Henry Sass’s Academy and the Royal Academy Schools.

He is known for the genre paintings which emulate William Powell Frith and was also a society portraitist.

This George Elgar Hicks painting demonstrates a range of beneficiaries receiving their dividends from investing in the Bank of England. This was regarded as a very safe investment receiving modest but dependable receipts of about 3 percent per year. What is interesting about this 1859 painting is the broad range of social classes depicted. It clearly feels that the investors in this engine of the British and Imperial economy is drawn from all levels, genders and sections of society. It is certainly an over romanticised depiction of the investors but it still depicts the received wisdom of the age in that they believed that all could and did benefit from the Victorian economy. The Bank of England would have underwritten investments, companies and corporations all over the British Empire and beyond. So, this image shows the end result of the imperial system, with the profits of British and Imperial corporations trickling back to the home population.