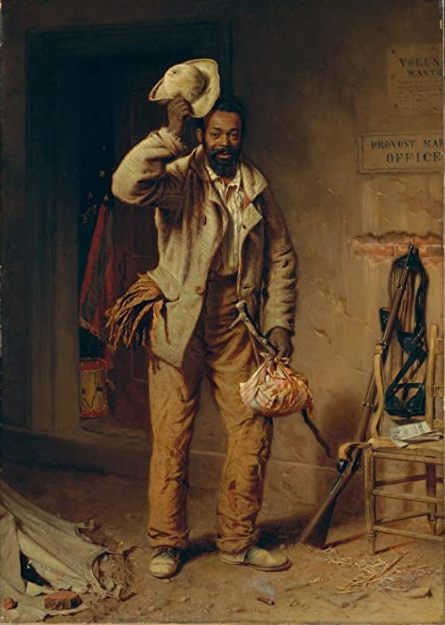 Thomas Waterman Wood was one of America’s most beloved genre painters.

He was born in Montpelier, Vermont in November, 1823, the son of a cabinet-maker. It is believed that Wood studied for a time in Boston under portraitist Chester Harding, and he traveled to Europe in 1858, where he may have studied briefly in Paris or Düsseldorf. Other than this, there is little direct evidence of formal training, a rather remarkable fact given the artist’s exceptional technical accomplishments and the status to which he rose in the art world.

Having returned from Europe, Wood journeyed to the upper south, painting portraits in Kentucky and Tennessee. It was at this time that he first encountered the free blacks who would become subjects of a number of his paintings.

His many paintings provide a documented account of rural New England in the years after the Civil War. Of particular contemporary interest are the many paintings of freed blacks both before and after the War, subjects which Wood treated with a sensitivity and empathy unusual for his time.

He was elected an Associate of the National Academy in 1869 and a full Academician in 1871. He became President of the Academy in 1891, serving until 1900. Toward the end of his life, he helped establish and endowed the Wood Art Gallery in his native Montpelier. His work can also be found in the Metropolitan Museum of Art, the Fine Arts Museums of San Francisco, the Brooklyn Museum, the Cleveland Museum, the Smithsonian American Museum, the National Gallery, the National Portrait Gallery, and many other museums across the United States.