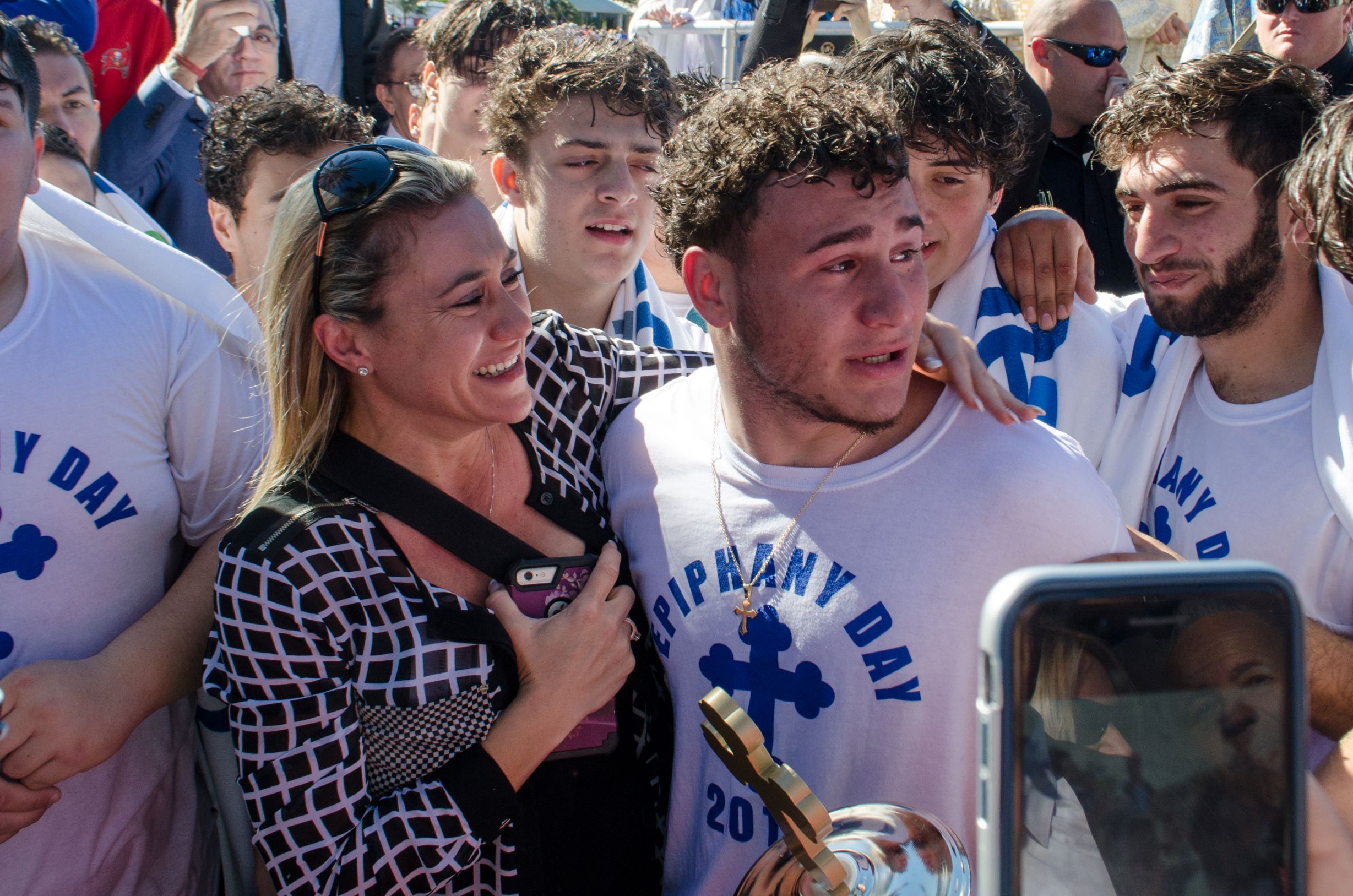 TARPON SPRINGS, FL – The annual celebration of the Baptism of Jesus Christ by St. John the Baptist in the River Jordan was celebrated on Sunday, January 6, 2019 at St. Nicholas Greek Orthodox Cathedral in Tarpon Springs, Florida.  A procession to the Spring Bayou commenced immediately following the church service for the Blessing of the Waters and Cross retrieval.

His Eminence Archbishop Demetrios, Primate of the Greek Orthodox Archdiocese of America, Metropolitan Alexios of Atlanta, were among the participants in this year’s observance .

“This Holy Event is not merely a yearly symbolic re-enactment but a “real time” transformation of nature. Therefore, people in the Tarpon Springs area, become recipients of the true metamorphosis of their environment.” said the Reverend Fr. Athanasios Haros, Dean of St. Nicholas Greek Orthodox Cathedral.

Leading up to the feast day, the Blessing of the Fleet took place on Saturday, January 5th at noon. Reverend Father Sampson Kasapakis and clergy  blessed the fisherman, their vessels, and the water in which they travel, and wish them safe and prosperous journeys. The service  occured at the Sponge Docks on the Anclote River, which feeds into the Gulf of Mexico. Both commercial fishermen and recreational boaters  participated.

Following the Divine Liturgy and Great Blessing of the waters, Archbishop Demetrios, hierarchs, clergy, dignitaries and thousands of people  formed an impressive procession to Spring Bayou, with school children in traditional costumes, choir members, Greek Folk dance groups from throughout the Tampa Bay Area. There, an invocation was recited, a young lady, Stella Bilirakis 15 released a white dove symbolizing the Holy Spirit to fly over the Bayou. The Archbishop casted a white cross into the water and fifty-eight young men dove for the cross, each seeking the honor of retrieving it. The retriever then kneeled with the cross before the Archbishop for a blessing.

Following the ceremony, an Epiphany Glendi (festival) at Craig Park with food prepared by Louis Pappas Fresh Greek, drink, live music and dancing. There were also  shows of traditional Greek dancing performed by the Levendia, the nationally award winning Greek dance troupe in addition to children’s games and activities.

His Eminence Archbishop Demetrios at the Glendi honored the Epiphany divers and the cross victor and divers were there throughout the day’s festivities.

From the crowd of 58 boys who jumped from dinghies into Spring Bayou during St. Nicholas Cathedral’s 113th Epiphany celebration, Skandaliaris, 17, emerged from the waters grasping the wooden cross tossed in by His Eminence Archbishop Demetrios, Primate of the Greek Orthodox Archdiocese of America.

It is a feat that tradition says brings a year of blessings to the cross retriever, which is the highlight of the event commemorating the baptism of Jesus Christ by John the Baptist in the Jordan River.

For Skandaliaris, who was born in Kalamos, Greece and raised in Tarpon Springs since he was three, it was a moment that brought him to tears of joy after years of watching others receive the honor.

St. Nicholas reserves the cross dive only for boys 16 to 18 and is one of the few, if not the only Greek Orthodox church in the U.S, .that bans girls. Every year one girl is selected from the choir and given the honor of releasing the dove before the dive.

The boys carried Skandaliaris on their shoulders through a cheering hoard of thousands back to the church as he held the cross above his head chanting “Axios!”

The largest Epiphany celebration in the Western Hemisphere brought an estimated 22,000 people to downtown Tarpon Springs on a cloudless and cool Sunday, according to spokesperson Johanna Kossifidis.