Ion by Euripides comes from Greece to THE TANK 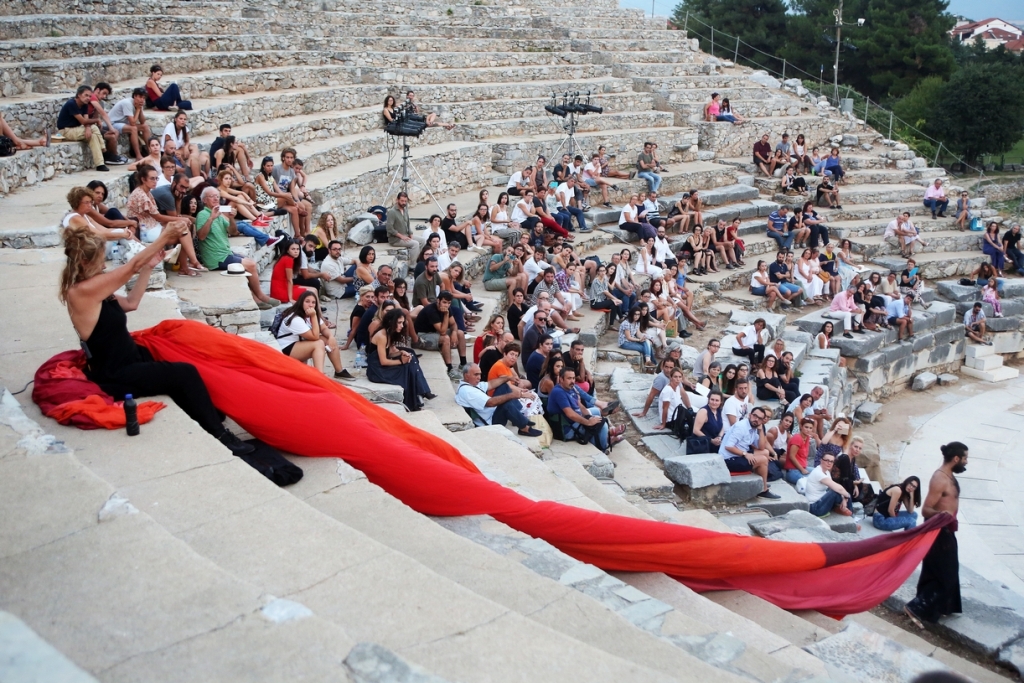 Ion by Euripides comes from Greece to THE TANK

The Show will be presented in Greek with English surtitles.

ION. The historic ancient Greek tragedy that narrates the struggles of the first King of Athens, written by the great Greek tragedian Euripides in 412 BC, comes to THE TANK on the 25th, 26th and 27th of April, in a new translation and direction by renowned Greek director Ioli Andreadi. Andreadi, a young theatrical auteur, has written and directed 28 performances so far, inspired by the works of Artaud, Moliere, Repin, Shakespeare and Sophocles, in major festivals and theatres in Greece, the UK, Germany, Italy and New York – where her credits include: a Fulbright for Artists/Masterclass at City Center Studios on Ancient Tragedy and Musical Theater, serving as Co-Artistic Director of World Wide Lab, Irondale Center and being a Member of the LCT Director’s Lab, with the sponsorship of the Stavros Niarchos Foundation.

The show, a performance of ION for just three performers, inaugurated the 1st International Laboratory of Ancient Drama that took place at the Ancient theatre of Filippi in Northern Greece in summer 2017, produced by the National-Regional Theatre of Kavala and by the Filippi Festival. Since then, it is touring Greece with great success. In late 2018 it was the first show in history to take the honorary permission to be performed at the Slopes of the Acropolis Archaeological Site. THE TANK is the show’s first stop in its world tour, to be followed by performances in Puerto Rico.

A few words about the show

Young ION – who will become the founder of IONES, aka the Athenians – arrives on stage while Creusa, his mother, is seated at the auditorium, among the spectators. The hero is charmed by the foreign woman, feeling a strange connection to her. In order to conquer her love and attention, lacking a mother himself, he decides to act all his struggles for her.

A few words about the play

ION by Euripides was written around 412 BC and consists of 1622 verses. The myth has Creusa, daughter of King of Athens, get pregnant despite her will by god Apollo and, after nine months, give birth to a son, in secret, alone and without any help. Out of fear and respect towards her family, she decides to abandon the newborn inside the very same cave that god Apollo made love to her. Under Apollo’s command, god Hermes transfers the baby to Delphi, the navel of the world, so that Apollo’s Priestess takes care of him at his Temple. The child grows up eating the offerings people bring to the god and, when he is a teenager, he becomes the Guard of Apollo’s Temple.  A few years later his mother Creusa visits Delphi together with her husband, in order to ask the Oracle why they cannot have children. So Creusa and ION, mother and son, meet.

The importance of the play

Is this tragedy a propaganda? Is it the poet’s attempt to invent a godly origin of the Tribe of IONES and, therefore, the Athenians, in order to justify their claim to rule the whole Aegean Sea? In ION what seems is not what is. You cannot see clearly what is real; it has to gradually manifest itself. Turning the invisible visible, making the hidden, coded and mystical elements of the play appear (“Now you see what you should see”, a leitmotif common in both Oedipus Rex and Ion, relating back to the Mysteries of Eleusis) and, finally, composing a clear story on stage that brings to light what is being implied, hidden or silenced, is the central aim of the new approach.

In the part of Creusa: Dimitra Chatoupi

A few words about Ioli Andreadi

Ioli Andreadi was born in Athens. She studied directing at RADA and King’s College London, where she was awarded a PhD in Performance Studies, on her experience of an ancient firewalking ritual, as an Alexander S. Onassis Foundation grantee. She lived in London for seven years directing shows and travelled to New York, with the support of the Fulbright Foundation Greece, the Onassis Foundation, the Stavros Niarchos Foundation, THE J.F. COSTOPOULOS FOUNDATION and King’s College London. She is an Art Theatre Karolos Koun Drama School trained actress, a Theatre Studies graduate (University of Athens) and holds an MA in Cultural Management from Panteion University.  She has directed 28 theatre productions in Athens, London, Edinburgh, Berlin, Rome and New York. She was a founding member of the international platform of theatre directors “World Wide Lab” that was created in 2011 at the Watermill Center and where she served as Co-Artistic Director 2013 and 2015. Since then, Ioli works intensively in Athens. In Greece, in the past three years, she has presented the following 10 shows as a director: “Artaud – Van Gaugh / avec un pistolet” at Theatre Semio in 2015, “Cenci Family”, MCF 2015-16, “210.000 oka of cotton” at PIOP, 2016, “Young Lear”, Athens and Epidaurus Festival 2016, “Murder in the Cathedral”, Filippi Festival 2016, “The Kingdom of Earth” by Tennessee Williams, Olvio Theatre 2016, “Every Brilliant Thing” by Duncan Macmillan and Johnny Donnahoe at NKT, Athens Festival and the Hellenic Center in London, “A man return to his home country believing he will get killed and gets killed” at Art Theatre in 2017-18, “The Misanthrope”, Syghrono Theatre 2018 and “Ion”, Filippi Festival, SAF, Alfa Idea, Acropolis and Greek and World tour 2018-19. Together with sociologist Aris Asproulis she is the co-author of 5 plays and the co-adaptor of 4. A certified yoga teacher, she teaches Acting Yoga and Viewpoints at “Dilos Drama School Dimitra Chatoupi” and “Performance: Theory and Practice” at the University of Athens.