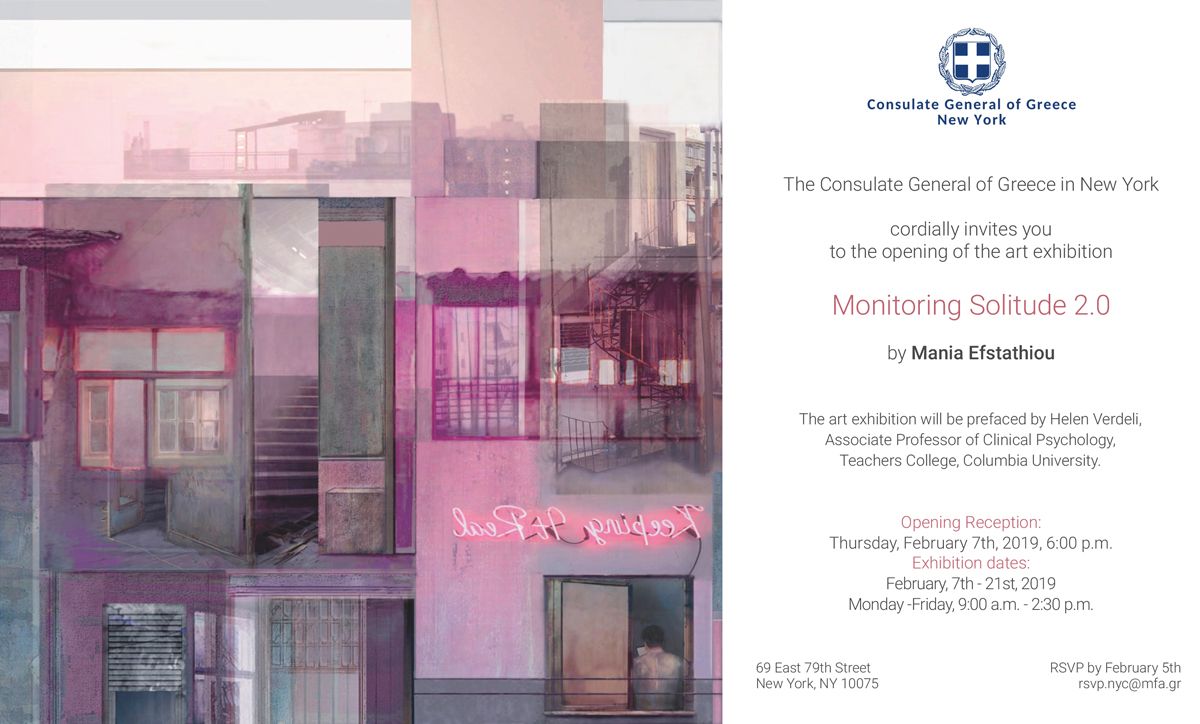 We would like to invite you to the opening of the exhibition “Mythology” by Andreas Kontellis on Thursday, May 9th, 2019, at 6:00 p.m., at the premises of the Consulate General of Greece in New York.

Andreas Kontellis, born in 1966 in Athens, received his BA from the School of Fine Arts (1984-1990), studying with professor P. Tetsis. During his studies, Kontellis was awarded scholarships from S.S.F. In 1993, he was awarded a three-year scholarship by the State Scholarship Foundation to develop a painting project in Greece. In 2000, on a scholarship from Athens Academy, he received Master of Art in Fine Art at London’s Middlesex University with professors John Thompson and Jim Mooney.

Kontellis is a well-established painter and is considered one of the main representatives of expressionist painting in Greece. He has exhibited his work in more than 20 solo shows in major galleries, museums and cultural spaces in Greece such as Zoumboulakis Galleries, the French Institute of Athens, Municipal Gallery of Corfu, Skoufa Gallery and also abroad in Cyprus and Spain and has participated in numerous group exhibitions.

According to the art historian and curator  Mrs Louisa Karapidakis, “Driven by his own existential concerns, Kontellis expresses his fears and emotions and brings on to the painting surface his quests, beliefs, ideas and even personal obsessions, without compromising the plasticity of his compositions and the aesthetic power of his images in the process. He paints in a very deliberate manner, even though his works seem to emit a primitive spontaneity, and he invents, defines and enforces his own expressive tools, such as selective abstractions, special shapes and unusual formal compositions, with the use of strong, coarse or quick brushstrokes and bold, raging colors”.

In his current exhibition the artist explores his personal mythologies and their vast array of interpretations. As the artist notes, “Mythology” is present, it coexists in every form of contemporary life since it demarcates our principles, our propulsions that luckily enough remain unchanged. Encoded life archetypes, overlying knowledge, information that affects and acts directly on our unconscious and formulates our existence”.