Interior with women in red robe 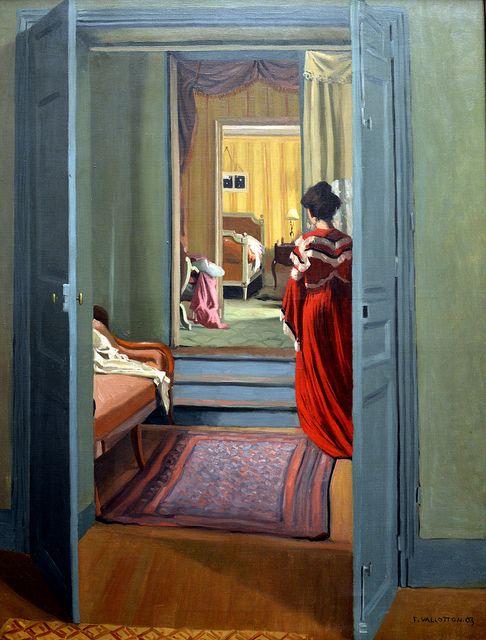 Félix Edouard Vallotton, (1865 — 1925), was a Swiss-born French graphic artist and painter known for his paintings of nudes and interiors and in particular for his distinctive woodcuts.

He studied to the Académie Julian where he became protégé of artist and printmaker Charles Maurin, who introduced him to the art of woodcut and to the haunts of Montmartre—the cafés and cabarets where he met Henri de Toulouse – Lautrec.

In 1892 he began associating with a group of artists called the Nabis (from Hebrew navi, meaning “prophet,” or “seer”) – Édouard Vuillard, Pierre Bonnard, Ker-Xavier Roussel, and Maurice Denis. Though only loosely affiliated with the group, Vallotton, like them, looked to Symbolist artists and to the Japanese tradition of woodcut. Both stressed the flatness of the surface and the use of simplified abstract forms, strong lines, and bold colours.

During the 1890s Vallotton became more politically engaged and communicated his sentiments through his prints, which were printed in Paris’s literary and political publications and he was particularly vocal about his support for Alfred Dreyfus.

Vallotton used woodcuts for nonpolitical purposes as well and he worked in the medium to depict simple yet striking intimate interior scenes of nudes, bathers, romantic and sometimes private moments between couples, and musicians.

He also designed a theatre playbook cover for Swedish dramatist August Strindberg’s The Father and served as illustrator for several books.