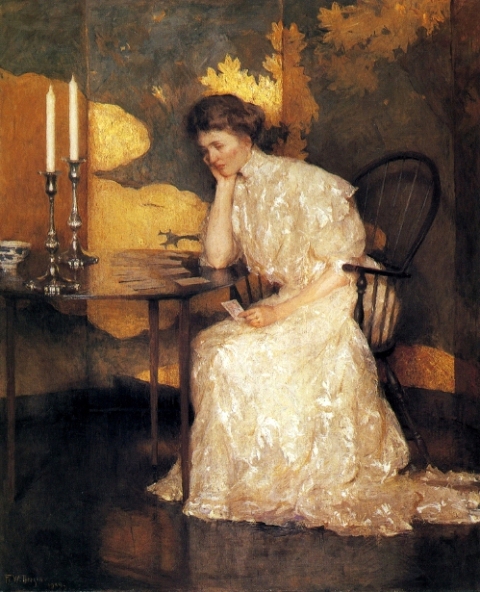 Frank Weston Benson (1862 – 1951) was a well-known and financially successful painter, printmaker, and teacher. A founding member of the Ten, Benson was associated with that group of painters who withdrew from the Society of American Artists in 1897 in order to promote their work through smaller, more personal exhibitions, the first of which took place in 1898. Though quite diverse in their approachs, much of their work was characterized by visible brushwork, a lightened palette, and a concern with the natural and evocative qualities of light.

He studied in Boston Museum School under Otto Grundmann. While still a student, Benson began his career as an art teacher in the fall of 1881, hired by the city of Salem to teach evening drawing classes, which were offered free to the public.

He also studied in Paris, at the Academie Julian, under Gustave Boulanger and Jules Joseph Lefebvre.

He received wide recognition for his own work and he won numerous awards. In 1896 he provided decorations for seven ceiling and wall panels in the Library of Congress. Benson became an Associate of the National Academy of Design in 1897 and an Academician in 1905. He was a founding member of the Guild of Boston Artists in 1914.

In 1915 the first exhibition of Frank Benson’s etchings and drypoints was held. The prints, which were primarily of sporting subjects, such as waterfowl, combined Benson’s great love of the outdoors with his free and open draftsmanship. So many variations of these subjects were created over the next decade that some accused the artist of being commercially repetitive. Nonetheless, the turn to sporting subjects in prints, watercolors, and paintings, changed the direction of his work and he created fewer of the serene paintings of women and children for which he had become so well-known. In the last years of his career his watercolor landscapes were much in demand.