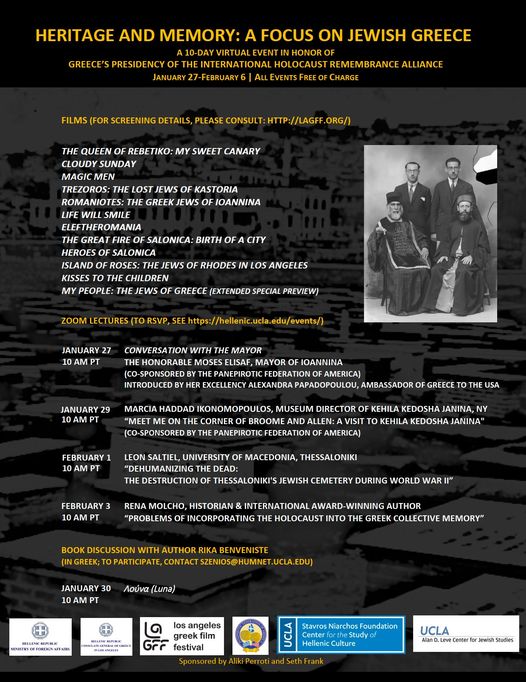 The Consulate General of Greece in Los Angeles, the UCLA Stavros Niarchos Foundation Center for the Study of Hellenic Culture and Los Angeles Greek Film Festival announce a ten-day virtual event, “Heritage and Memory: A Focus on Jewish Greece”, to be held from January 27 to February 6 in honor of Greece’s upcoming Presidency of the International Holocaust Remembrance Alliance (IHRA), from March 1.

The event’s program includes four prestigious speakers who will present views of Greece’s Romaniote and Sephardic communities to an international audience, as well as free screenings for twelve films that look at the Jewish communities of Thessaloniki, Ioannina, Kastoria, Zakynthos, and Rhodes. The majority of films will be available worldwide for online viewing throughout the entire ten days of the event.

The event is being held under the auspices of the Greek Ministry of Foreign Affairs and supported by the philanthropists Aliki Perroti and Seth Frank. Partners include the Panepirotic Federation of America and the UCLA Alan D. Leve Center for Jewish Studies.

The ten-day event kicks off on January 27 at 10 am (PST) / 1pm (EST) with an online conversation with the Honorable Moses Elisaf, Mayor of Ioannina.

Her Excellency Alexandra Papadopoulou, Ambassador of Greece to the United States, will offer welcome remarks during the event, as will Dr. Efstathios Lianos-Liantis, Special Envoy of the Greek Ministry of Foreign Affairs for Combating Anti-Semitism and Safeguarding the Memory of the Holocaust and Head of the Greek Delegation to the International Holocaust Remembrance Alliance.For more information about all events (including film screenings) linked to “Heritage and Memory: A Focus on Jewish Greece” and to RSVP click on https://hellenic.ucla.edu/heritage-and-memory/